Aquaculture International (AQUI) is the peer-reviewed journal of the EAS. Its 2016 Impact Factor (IF) was 1.095, thus reaching one of the main objectives of the Editorial Board and EAS Board. In 2017, the IF rose again to 1.283.

We are proud to see that it has now exceeded the milestone level of 1 for the last 5 years and hope very much that this will encourage more publications from EAS members and non-members. See more on submitting papers to AQUI

New site template - so where do I log in?

You may have noticed the the old 'login' box is no longer on the left on your screen. It has been replaced by a floating image that has two elements.
On the top (the 'head') is the login box. After login, scroll down to the bottom of the page, where you will see your profile picture. Click on that to edit your profile and manage your connections.

Below that, the + sign takes you to the 'join EAS' page, where you can quickly and easily become a member.

EAS Mentoring: “Adopt a Student” - and get FREE EAS membership

EAS members have a collective knowledge and experience that runs into thousands of years! ‘Senior’ members of EAS that have supported the society ‘since the beginning’ are also in many cases leaders in their fields of expertise and highly-cited authors.
Over recent years, our EAS Student Group has re-invigorated and strengthened our student membership and students that follow us on social media. Student participation at recent Aquaculture Europe events has also been impressive and an ideal chance to meet and have a chat with these ‘seniors’.
We therefore have the basis to put in place a mentoring activity, where students and seniors can interact informally and not just at AE events.

We are calling this activity “Adopt a Student.” 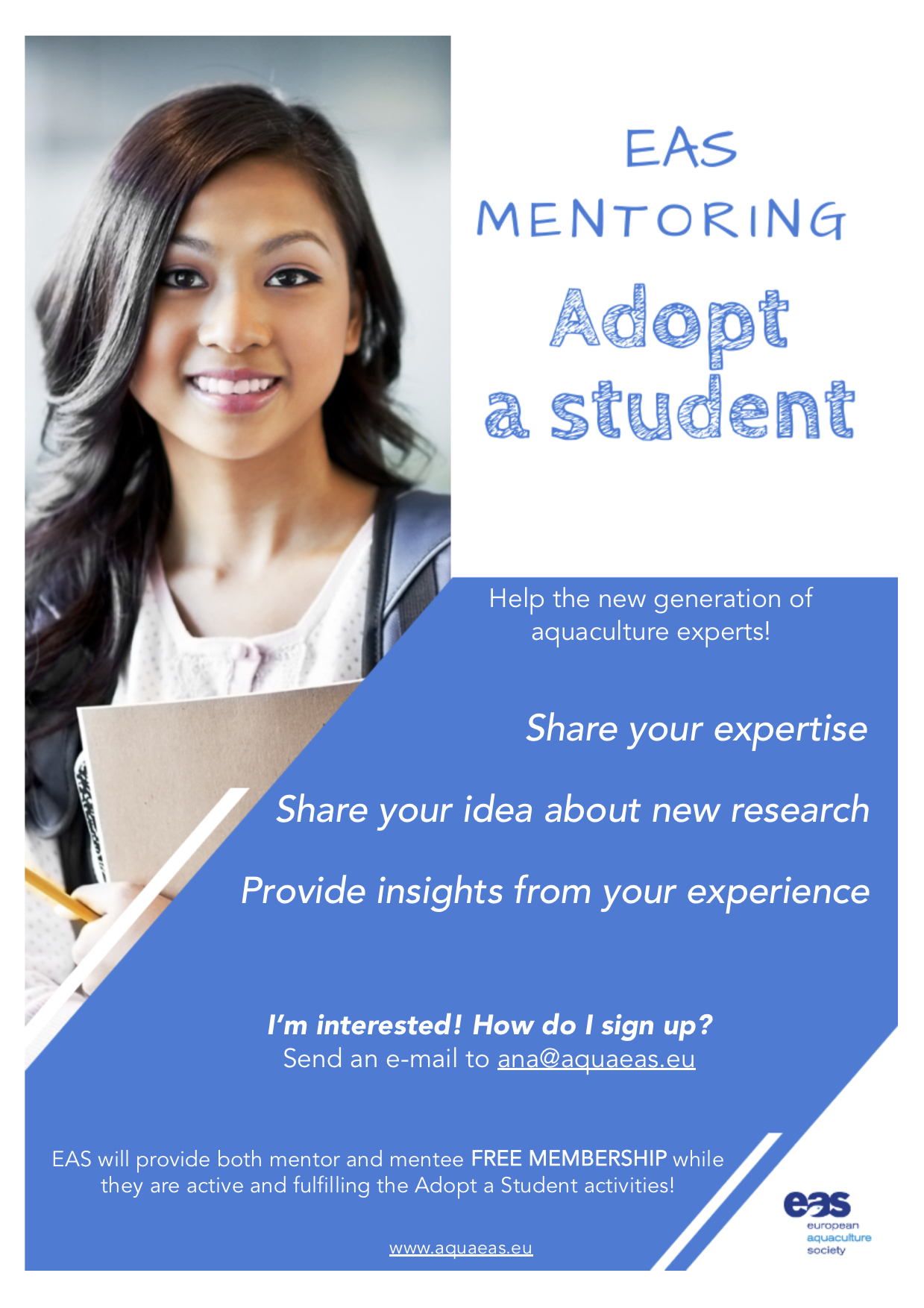 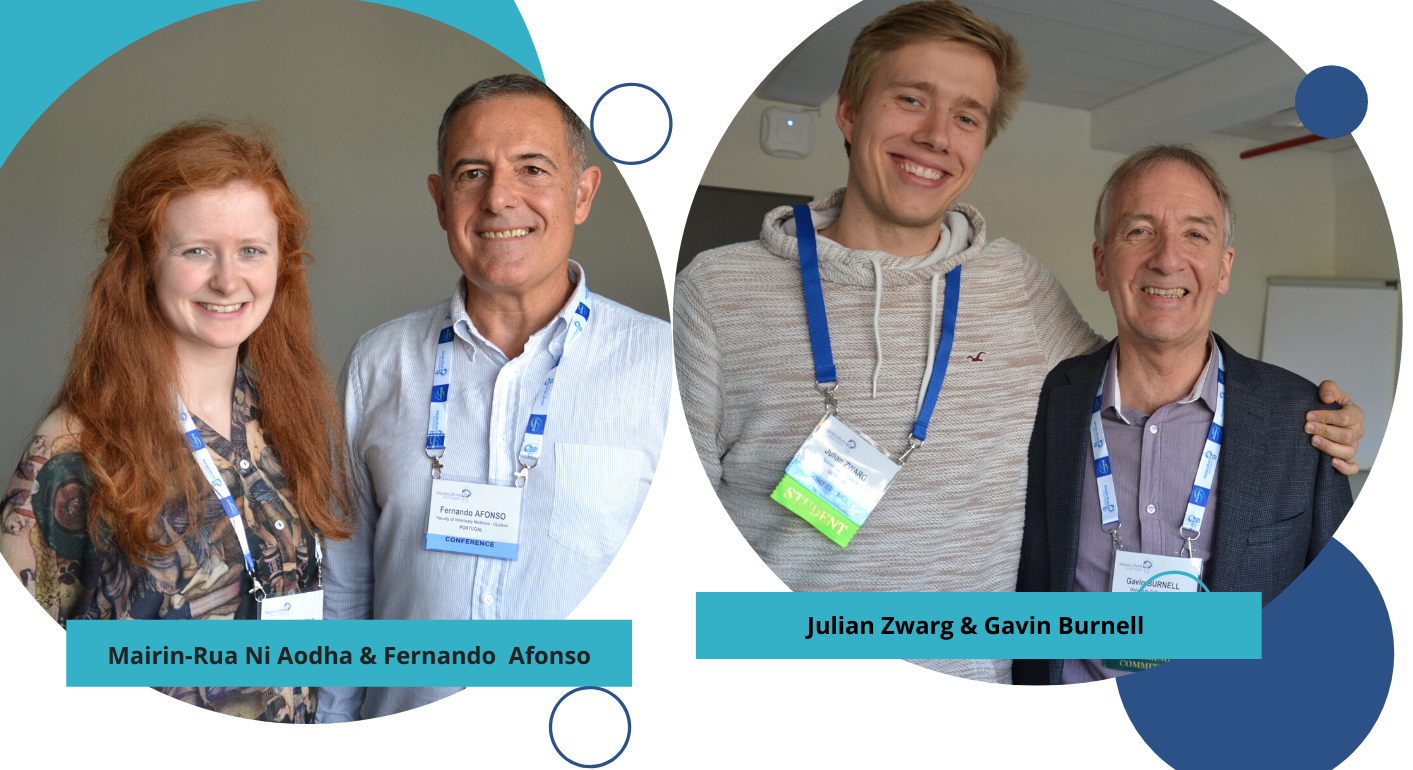 Feedback from our two Adopt a student pairs, Fernando Afonso and Mairin-Rua Ni Aodha & Gavin Burnell and Julian Zwarg are available in the form of a podcast.
Click here and listen free EAStalk podcasts. 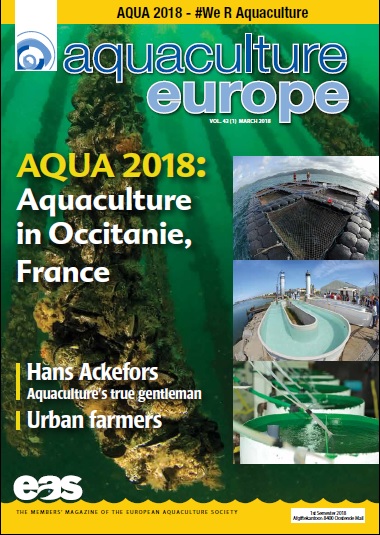 The upcoming AQUA 2018 event #We R Aquaculture (see box on the right), co-organised by EAS and WAS, will take place in Occitanie.
This is the name given to one of the new ‘super regions’of France, created in 2016 from the former regions of Languedoc-Roussillon and Midi-Pyrénées. Occitanie comes from the historical name of the broader region of southern France and the historic use of the Occitan language and its various dialects.

This article has been published by EAS in its "Aquaculture Europe" magazine and by WAS in its "World Aquaculture" magazine. Click on the image to get the article.

You'll also see links on that page to the programme, posters, participants list and poster awards.

AE 2017 was a great success, attracting a total participation of 1.688 from 62 countries. Of the full conference delegates (1294), 255 were students. The trade show presented products and services from 92 exhibitors and had 394 visitors. A total of 437 oral and 356 poster presentations were given during the conference.

At the opening plenary session of the Aquaculture Europe 2017 event - organised by the European Aquaculture Society in Dubrovnik, Croatia - Sadisivam (Sachi) Kaushik, founder and director of the Fish Nutrition Joint research units of the Hydrobiology Station at St Pee sur Nivelle, was presented with an Honorary Life Membership of EAS.

Honorary Life Membership of EAS is an award given to those persons that have had a marked impact on the development of European aquaculture. Since 1981, EAS has bestowed this award on only 12 persons, including such names as Eric Edwards, Peter Hjul, Colin Nash, Courtney Hough, Pascal Divanach, Patrick Sorgeloos and Michael New. 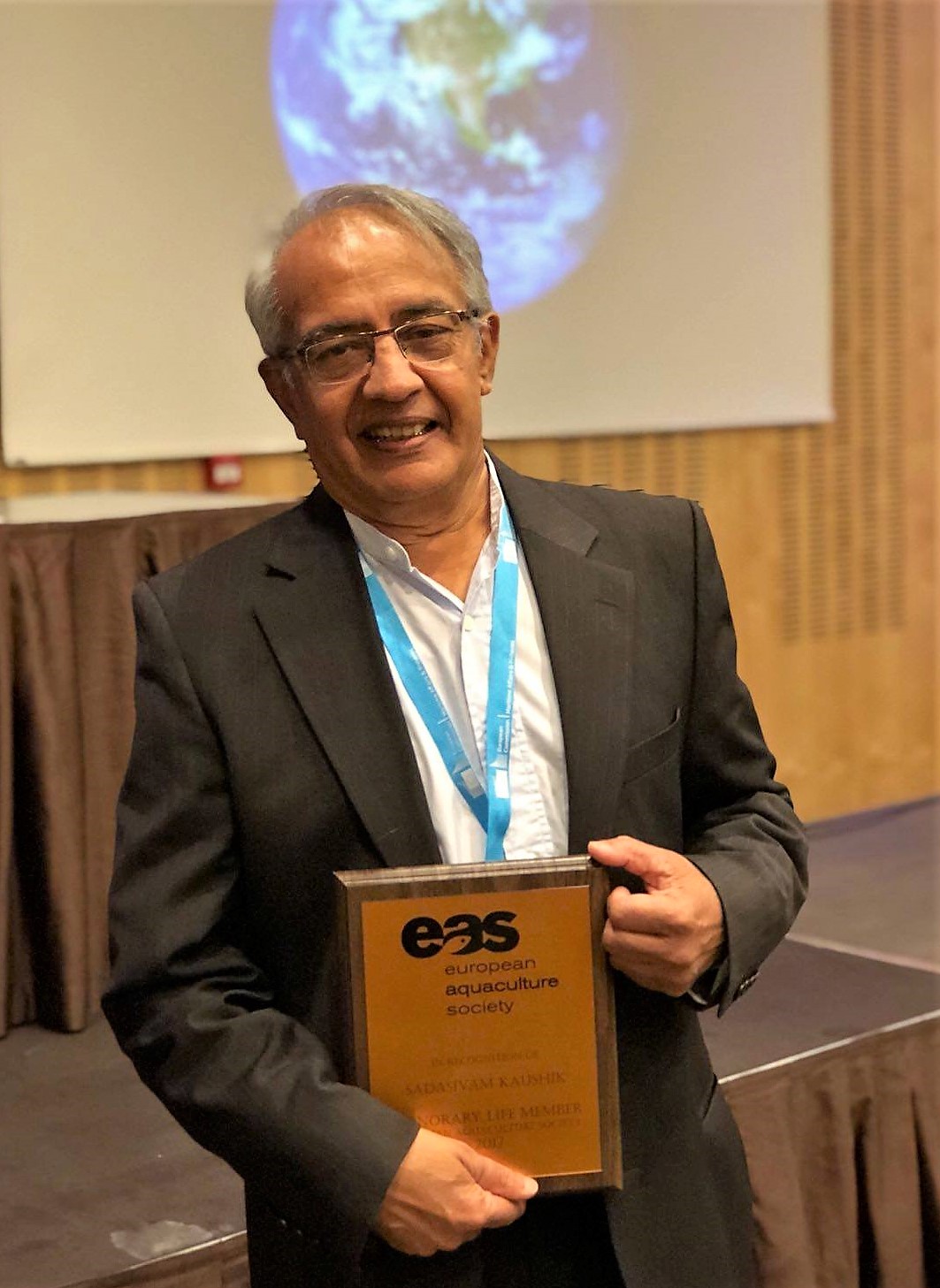 The award was presented by the EAS 2016-2018 President Bjorn Myrseth, who introduced the awardee as a very well-known name in aquaculture – not only in Europe – but throughout the world. His name is synonymous with the word ‘nutrition’ – and it was therefore fitting that the award was made just after a very thought-provoking plenary presentation on the evolution of the human brain and the pivotal role of marine DHA and trace elements, entitled “Is substitution compromising our omega 3 (DHA) position?” by Professor Michael A Crawford of Imperial College, London.

Bjorn Myrseth described how, over a period of 30 years, Sachi Kaushik founded and directed the Fish Nutrition Joint research units of the Hydrobiology Station at St Pee sur Nivelle, France and many of his PhD and other students have gone on to become respected scientists in this field.

He has continuously supported the development of the EAS and has tirelessly supported aquaculture expansion through the FAO, UNDP, World Bank and other organisations. In 2015, he was made an Officer of the ‘Ordre du Mérite Agricole’ by the French government for his services to nutrition and to aquaculture.

He has published more than 300 papers and given countless presentations, expert consultations, articles and interviews on the issues of replacement of fish meal and fish oil, fish in/fish out ratios, human nutrition. Now retired from INRA, he is currently leading a migratory life between his home in the French Basque country and the University of Las Palmas in Grand Canaria, where he is the European Research Area chair on ecosystem approaches to sustainable aquaculture development in the eco-aqua initiative.

On calling Sachi to receive his award, Bjorn spoke of his pleasure and personal honour to make the presentation of Honorary Life Membership to him on behalf of the European Aquaculture Society. Judging from the appreciation showed by the audience, Sachi was a very popular awardee.

AQUI Impact once again above 1

The 2016 Impact Factor of our peer-reviewed scientific journal Aquaculture International was 1.095 in 2016, hence rising above 1 for the first time since 2012. We very much hope that you will continue to submit quality papers and reviews to the journal and especially arising from presentations made at our Aquaculture Europe events. EAS members have access to all recent papers published online, by logging in and then going to the menu item 'Members' and clicking on 'AQUI online' on the drop down sub-menu.

We have update our abstracts for our Aquaculture Europe events! So please make sure that you follow our new  abstract guidelines on quality and on format when you submit.
Abstracts need to reflect the quality of the science, in terms of its rigour, its contribution to knowledge and its impact to end-users. EAS strongly supports good knowledge management. Please therefore clearly show the impact and implications of your research for the sector and how you will/have communicated the knowledge derived for the potential users of your results. We recognise that ongoing analysis and interpretation of results may hinder early submission, and it is therefore possible to amend/update your abstract before a second (final print) deadline (usually early July). Naturally, updates and amendments can only be made to abstracts that have been submitted before the initial deadline, so this is not an opportunity to make a late initial submission Please kindly pass on this message to your colleagues and contacts that would still like to submit.

Royal DSM and Evonik today announced their intention to establish a joint venture for omega-3 fatty acid products from natural marine algae for animal nutrition. This breakthrough innovation will, for the first time, enable the production of omega-3 fatty acids for animal nutrition without using fish oil from wild caught fish, a finite resource. Evonik and DSM’s alternative omega-3 source is the first to offer both EPA and DHA and will be aimed at initial applications in salmon aquaculture and pet food. The companies will together build a commercial-scale production facility in the United States. See film summary

EAS Sponsors show their commitment to our objectives and notably the linking of science and industry.